If you’re an avid follower of our written reviews, you may have noticed that the Toyota Alphard and Toyota Hiace Super Grandia Elite were reviewed back to back. That, my friends, is no mere coincidence. With the launch of the Super Grandia and its plush cabin, it got us thinking whether the Super Grandia is better than the Alphard.

After reviewing the two models, I wasn’t able to answer the query that made me test these units in the first place. Both cars got 4.1 out of 5 in both review summaries, so even after all that, I still didn’t know which was better than the other – until today, that is.

Recently, I have been tasked with purchasing our family’s next car. It’s a tough job, especially with my father’s lust for captains’ chairs and sleeping. With my dad in mind as the target consumer, I can narrow down my criteria for choosing one over the other.

Without a doubt, both cars are extremely good looking for their segments. The Hiace Super Grandia looks epic and is a radical departure from prior generations. The Alphard is also a league ahead of its predecessor. Both nameplates showcase great exterior styling in my book.

Objectively, both are similar, with an equally impressive lighting array, a large front grille, sliding doors, and equally epic taillights. The Alphard does have a more impressive signal light, which sequentially fires orange LEDs, but the Super Grandia has large LED bars that establish the presence of this giant.

The Alphard does look warm and inviting, however, which only reinforces its character. Interior lighting is where the Alphard wins. Both may have LED reading lights that swivel, but the Alphard has a substantial set of ambient lights, which makes the few LED strips on the Hiace look diminutive.

Cargo space and passenger space undoubtedly going to the Super Grandia. You can seat three more than the Alphard, and you get double the amount of captains’ chairs. Cargo is also supplemented by the fact that it is so wide. Both models feature seats that fold up and out to the sides revealing a flat floor – though the Super Grandia doesn’t have a power tailgate, which would have made opening and closing the big door much easier.

In terms of interior quality, the Alphard wins, but in terms of practicality, the Hiace Super Grandia takes the cake. You just get more of everything except for a little bit more refinement. I’d have to give the interior portion to the Super Grandia because it’s more versatile and can haul people and cargo at the same time. The Alphard meanwhile can only haul one or the other.

Sitting in either captains’ chairs while stationary yields similar results, but going over bumps in the Alphard is second to none. The ride quality of the Alphard is class-leading, if not market-leading. All four corners come with a fully-independent suspension and a monocoque chassis that absorbs and smooths out bumps and divots on the road. The Hiace Super Grandia may have coil spring suspension all around, but it still has a ladder frame chassis. Both models have similar NVH insulation, though. 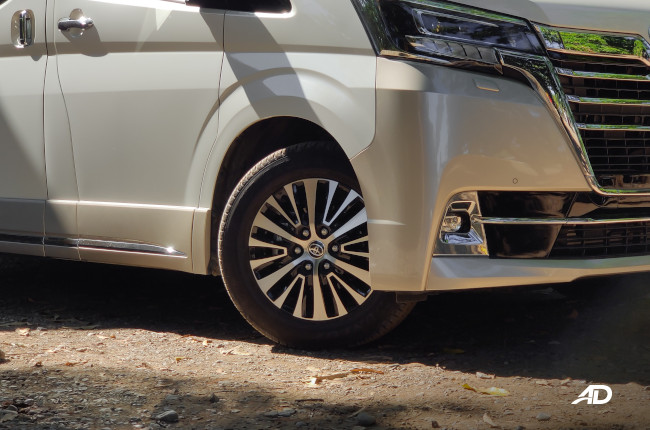 The Hiace Super Grandia was never going to take this category. The Alphard simply cannot be beaten because it was engineered from the ground up to be comfortable. The Hiace’s platform was meant to carry heavy loads and be a multipurpose kind of van Versatility does have its benefits, but you can’t be the best at everything, so the Alphard outright wins on the comfort front.

Both vehicles have the exact same head unit, which outputs to 6 speakers in the Super Grandia, and 8 speakers in the Alphard. The Alphard’s sound system is slightly better than the Hiace’s, but not by a lot. It’s a minor win in the face of a war that’s lost based on the spec sheet alone.

In terms of tech, the Hiace eats the Alphard alive. It has USB ports for every row of seats, it has Toyota’s Safety Sense 2 system which allows for low-speed cruise and automatic braking, and it has a backup camera. Yes, even with its exorbitant price tag, the Alphard does not come with a backup camera. The Alphard does have an auto start/stop system that helps save fuel and a power tailgate, but that’s about it. For a car that is focused on delivering the best backseat experience, it falls short in the tech department.

So I can’t stress this enough, the Hiace Super Grandia just wins. I’m sure there are more tech features to lay down, but that’s beating on a dead horse at this point. As a passenger, driving characteristics are secondary to comfort, but they still hold weight regardless. Because of its chassis and suspension, the Alphard drives way better than the Super Grandia. Superior handling is another hallmark of the Alphard’s monocoque chassis. Let’s put it this way, I would rather take the Alphard to the race track, and leave the Hiace in the pits – not that I would take either on track. The torque from the Hiace’s motor can’t be fully felt because of the weight. The Alphard, however, has a higher horsepower figure and apt torque for its weight, making it weirdly capable in a straight line. The 2.8L diesel engine in the Hiace Super Grandia produces 174 hp and 450 Nm of torque, while the Alphard’s 3.5L V6 makes 292 hp and 361 Nm of torque. Without a doubt, the Alphard is the better driving car, which also correlates to the ride comfort.

Here’s where it’s more or less dead even, but there’s a catch. The Hiace does have a 2.8-liter diesel engine which should be more efficient than the 3.5-liter V6 of the Alphard, but the Hiace has more weight to lug around. The Alphard, meanwhile, has less to carry, but more cylinders and displacement, which nets it a worse figure while idling in traffic. When I tested the Hiace on the highway, I was also hauling 8 passengers plus baggage, while I had only two people riding with me in the Alphard. 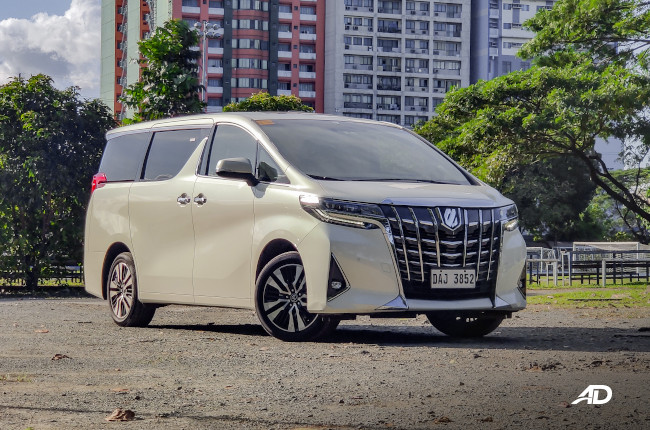 According to our tests, the Hiace Super Grandia gets 6 km/L while the Alphard gets 5 km/L in traffic. Faster runs in the city would yield 8 km/L in the Hiace, and 7 km/L in the Alphard. On the highway, the Hiace yielded around 13 km/L, the same as the Alphard Even with the weight penalty, the Hiace was still able to get slightly better efficiency, and it has cheaper fuel to boot. I’ll have to hand this round to the Hiace Super Grandia. Both cars get the same amount of airbag coverage, understandably – the Hiace gets 9 while the Alphard receives 7 so no clear winner there. If we ignore the elephant in the room, the Hiace and Alphard are pretty even with their passive safety kit. Let’s talk about that elephant in the room now. Toyota Safety Sense 2 is present in the Hiace Super Grandia Elite trim, and features active safety features that the Alphard does not have, such as adaptive cruise control, forward collision mitigation, active braking, lane keep assist, low speed follow, and more. There’s no contest. The Super Grandia takes this one from the minivan.

Here’s another thing that I have to consider though, no matter how many times the Alphard wins with relation to driver-centric tech, the guy paying for the car will most likely be at the back taking a nap on his way to work, so there is no point to having all that tech when refinement is clearly of value to elite customers. With that being said, I can’t just hand the win to the Alphard on those merits alone. 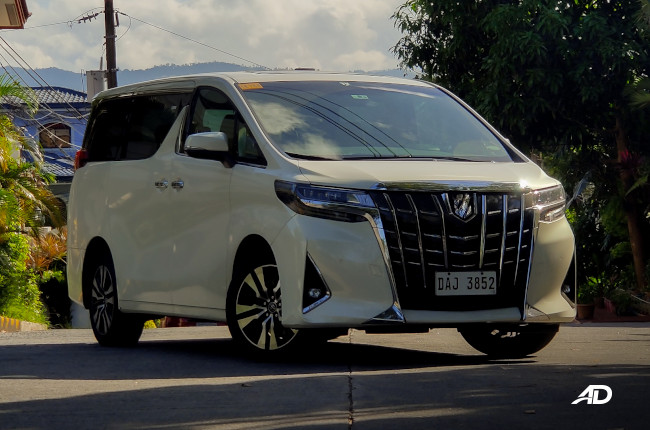 The Hiace Super Grandia Elite does have everything else going for it aside from driving, handling, and comfort, but it can’t just smother you with features that you may never get to use because, again, the person who paid for an interior with captains’ chairs, will be sitting in the captain’s chair, and even if you can charge your phone, the guy sitting in the Alphard won’t get jostled around in the cabin.

Both cars kept trading blow after blow, but the real tie-breaker will be the price of acquisition. The Hiace Super Grandia Elite sells for P2,998,000, while the Alphard goes for P3,755,000. Both are in their most expensive trim levels, with a white pearl or two-tone paint job. The point that I want to leave with is that even at a hair under P3,000,000, the Super Grandia can stack up to a car that is about P750,000 more expensive. If you think about it, that’s a relative bargain for what you get, but then again, an Alphard is still an Alphard. If you’re not too price-conscious, and you want the most comfortable experience, the Alphard is right for you. If your family is rather large and you’re looking for something that is fuel-efficient, has enough tech, and comes at a good value, the Hiace Super Grandia Elite is a good choice, and with that, it wins this comparison (Cue the pitchforks).