The rugged Toyota Land Cruiser isn’t long for this world, or at least for the U.S., but its upmarket cousin, the Lexus LX, returns with a complete redesign for 2022. The fourth-generation LX 600 rolls out with an all-new platform shared with the redesigned 2022 Toyota Tundra and the global (but not stateside) version of the next-gen Land Cruiser. (Lexus is Toyota’s luxury division.) The 2022 LX also benefits from a new powertrain, off-road features and tech to conquer the unbeaten path or — in most cases — shuttle large families around town. 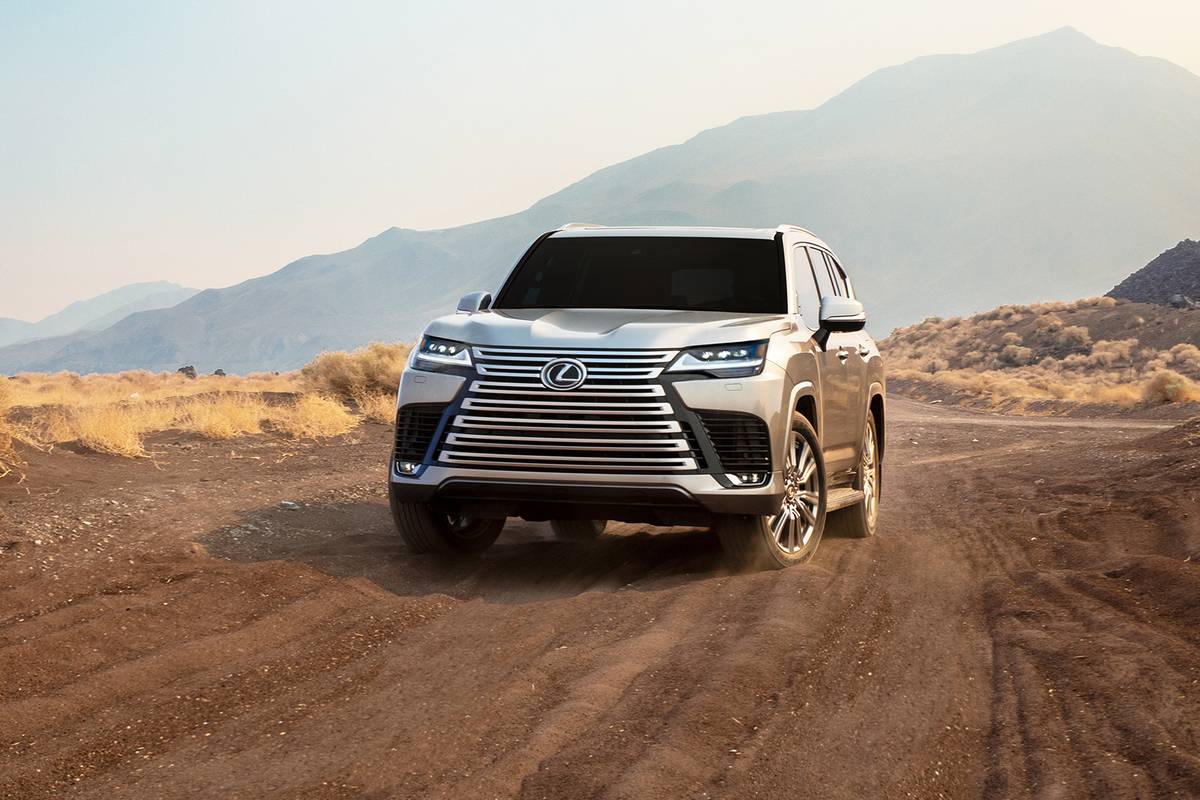 The 2022 LX retains its predecessor’s body-on-frame construction, but the LX 600 hails from a new platform that’s 20% more rigid and has a lower center of gravity; Lexus says that makes for a smoother, more comfortable ride. The redesigned SUV drops 441 pounds while gaining horsepower and torque.

Under the hood, Lexus swapped the outgoing 5.7-liter V-8 engine for a smaller but more powerful turbocharged 3.5-liter V-6. The new engine makes 409 hp and 479 pounds-feet of torque, up from 383 hp and 403 pounds-feet of torque in the previous LX 570. Lexus claims the new engine’s torque improvements will be noticeable in off-road, low-speed driving, and we can attest to the engine’s broad power band in the 2022 Tundra.

A 10-speed automatic transmission takes the place of the eight-speed in the third-gen LX. According to Lexus, it has been optimized for both on-road and off-road performance, with a wide range of gear ratios for smooth starts and acceleration at both low and high speeds.

The suspension carries over from the previous generation with a few tweaks to improve ride comfort and stability. The vehicle gets optimized coil springs for more stability on-road, plus a longer suspension stroke for off-road performance. The position and angle of the shock absorbers were adjusted to better absorb vibration and increase stability.

An enhanced Active Height Control suspension, which includes air springs, gets a wider range of ride heights and can adjust height faster than the outgoing model. The various settings are Normal, Hi1, Hi2 and a lowered setting for getting in and out; they adjust automatically based on the setting of the Multi-Terrain Select system. AHC provides more stability when turning, accelerating and decelerating. The suspension also offers adaptive shock absorbers, which Lexus calls an Adaptive Variable Suspension.

At long last, the 2022 LX adopts electric power steering — a testament to its age, the outgoing generation still had a hydraulic setup. 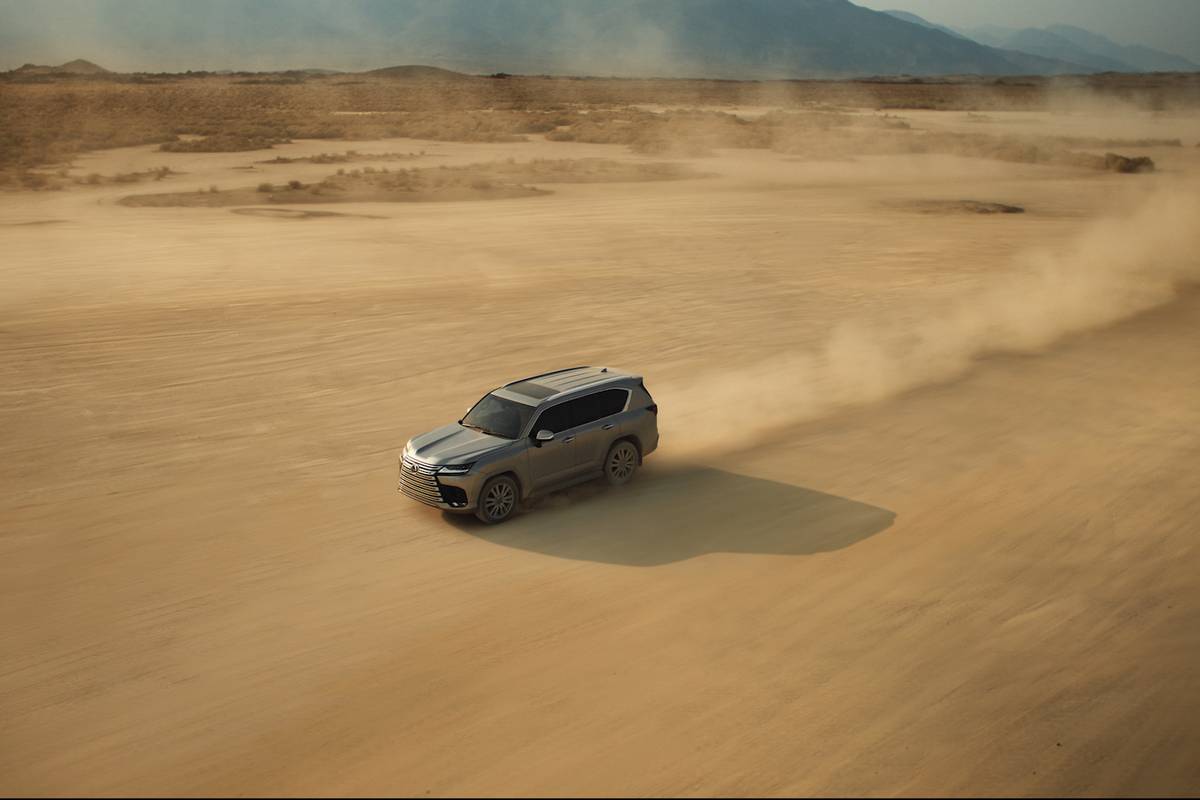 LX owners that dare to use the SUV’s off-road capability will find improvements in the vehicle’s Multi-Terrain Select system, with a new dual-screen dashboard display to simultaneously track system settings and observe surrounding obstacles through various camera views. The wheelbase, at 112 inches, remains the same as the outgoing LX; as do approach, departure and breakover angles (25, 20 and 23 degrees, respectively). Water-fording height, at 27.5 inches, also remains the same.

Available terrain-selection modes in the current LX are now up to six: Dirt, Sand, Mud, Deep Snow and Rock, plus a new Auto setting that automatically adjusts variables, like the hydraulic brake pressure and torque application, based on road conditions without any driver input. The system was previously limited to low-speed four-wheel drive conditions but now works for high-speed 4WD situations as well. Additional off-road-friendly features that return in the 2022 LX include Crawl Control — a sort of low-speed, off-road cruise control — and downhill assist.

Lexus’ Multi-Terrain Monitor returns in the 2022 LX. The four-camera system provides the driver with images around and underneath the vehicle on a new 12.3-inch upper multimedia display. A smaller 7-inch lower screen displays information from the selectable terrain modes.

The largest Lexus remains recognizable as an LX, but it gets several fresh exterior elements. The A-pillars are pulled back to create a cab-backward look, and a new grille with seven sets of floating bars replaces the framed version of the outgoing LX’s classic spindle. New L-shaped lights and standard 22-inch alloy wheels (the largest for Lexus) comprise the rest of the notable exterior updates.

The 2022 LX 600 brings the nameplate’s first-ever Ultra Luxury trim. That model comes with a standard two-row, four-seat configuration that gives passengers in the second row more space to stretch out. The rear seat reclines up to 48 degrees, and backseat passengers can deploy a footrest behind the front seat. The head restraints, seatbacks and lower cushions are curved to help maintain posture and improve comfort. In addition to a standard rear-seat display that can fold down, second-row passengers get their own control panel, wireless device charger, large console and work surface.

Another inaugural trim for the LX is the F Sport, which gets a sportier look and additional performance enhancements. The F Sport wears a unique mesh spindle grille with black framework. Inside, it gets custom F Sport seats intended to reduce lateral G-forces. An exclusive Ultra White exterior and Circuit Red interior will be available.

F Sport models also get unique performance upgrades, too, with a limited-slip differential, a rear stabilizer bar and performance tuning for the steering and adaptive shocks. 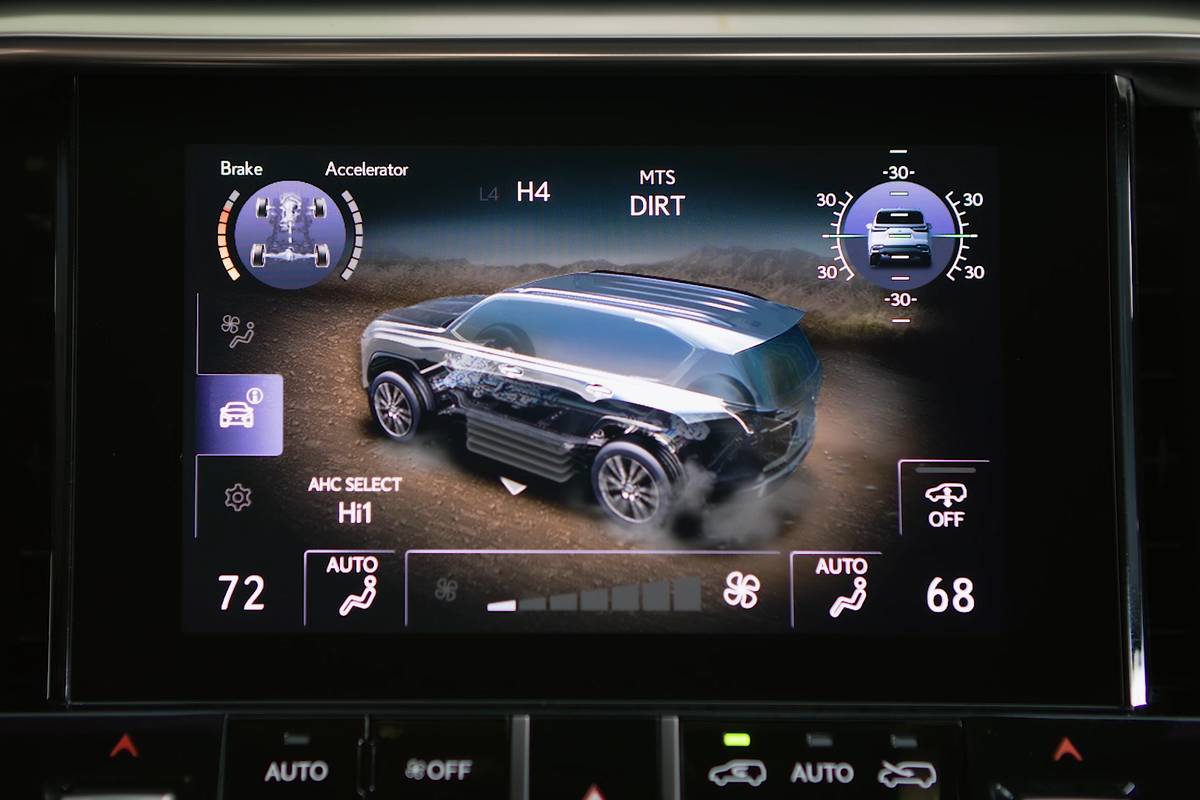 The multimedia system is accessed through dual touchscreens: The upper screen displays navigation, audio and the Multi-Terrain Monitor, while the lower screen is tasked with climate controls and driver information for the terrain-selection system. The new multimedia display replaces the outgoing model’s single 12.3-inch screen, which employed a clumsy console controller instead of a touchscreen. The move to touchscreens should improve usability, but the two-screen setup is odd. We’ve found similar layouts from brands like Acura and Infiniti harder to use than a single, larger screen — and the Infiniti QX80, an LX rival, just moved from two screens back to one. The redesigned Tundra and Lexus’ own NX both now offer a single 14-inch touchscreen, so it’s odd the LX didn’t go that route. 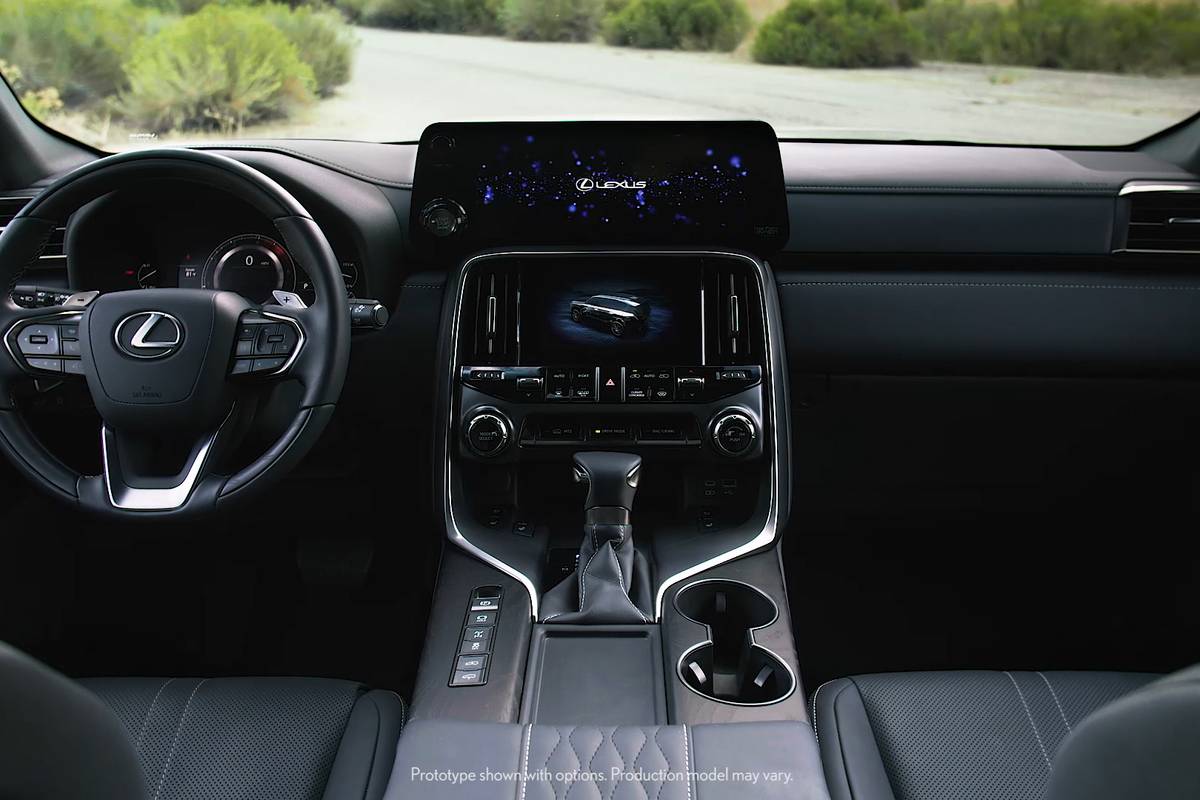 As for driver-assist features, the new LX features the latest version of the Lexus Safety System Plus 2.5. The new safety suite updates the outgoing vehicle’s automatic emergency braking with improved camera and radar capabilities that can detect bicyclists in daytime and pedestrians in daytime and low light. Additionally, the system adds enhanced lane centering, with left-turn intersection support and all-speed adaptive cruise control. Lexus gave no indication of whether the LX will offer hands-free lane centering, a feature offered in the Escalade and Navigator. But the brand has its own forthcoming system, called Teammate, in the flagship LS sedan, so the LX might get it at some point.