The Volkswagen Golf GTI used to be a secret just for the enthusiasts. It was based on the plain old Golf, which kept buyers unaware, but we know that the hot hatch is one of the best all-rounders on the market today. It does speed, it does comfort, it does handling. It has a hatch for cargo, and it’ll fit four adults. It even gets good gas mileage.

So, when VW canceled everything but the GTI and R for the eighth-generation compact hatch in the US, we were only mildly concerned. The alternative option was canceling the fun Golfs and keeping the basic ones or killing it in the US altogether. We think VW made the right choice here and were elated when the company invited us out to our local, Metro Detroit race track for some hot laps in the upcoming vehicle, as well as an autocross course, to show us what it could do

While it shares the same platform as the old GTI, the Mk8 GTI has reconfigured wishbone bearings and revised damping hydraulics. The springs and buffer stops are reconfigured as well, to give a front axle spring rate 5% higher than the last one. It also features an aluminum subframe that saves 7 pounds and revised multilink rear suspension.

Volkswagen’s Vehicle Dynamics Manager debuts here, combining the electronic stability control (ESC) with the electronic differential (XDS) and the optional DCC adaptive damping system. It adjusts 200 times a second, but the key here is the limited-slip differential. It uses all those systems above to optimize grip in fast corners by sending power to the wheel with the most traction. In the sportier drive modes, it acts faster and more often, and when you turn the ESC off, it gets even better.

This is what we were thinking about when entering the first left-right combination at the M1 Concourse racetrack in Pontiac, Michigan. It’s a condo-style short track with about 1.4 miles of length and about ten turns depending on how you count them. For the first time, we were running the course counterclockwise, which added some new challenges. But VW’s front limited-slip differential is what made this drive so enjoyable and controllable, both on the road course and later the autocross.

The new car is a full 4 seconds faster over VW’s Ehra-Lessien test track, and that’s mostly due to its handling. Horsepower is up from 228 hp to 241 hp while torque swells from 258 lb-ft to 273 lb-ft. Another big addition is the new speed-related brakes that offer a normal response when at normal speeds but quicker engagement at higher speeds. 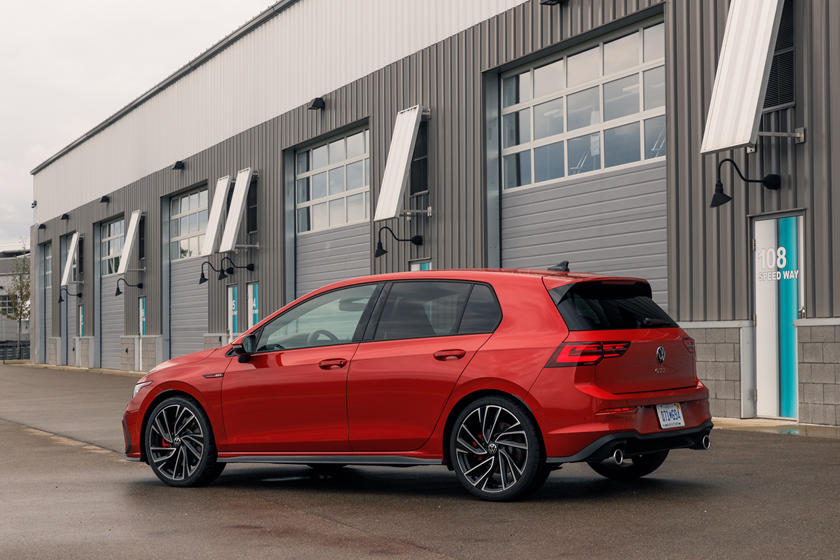 VW threw some Bridgestone Potenza R tires on the front wheels of the GTI, which seemed to give it almost unlimited stick. VW reps said that the GTI won’t come with these extraordinarily expensive and grippy rubbers, but something offering similar performance, of which there are few. Between those tires and the differential, as long as you stayed on the gas, understeer – where the front end loses grip – was basically eliminated.

After the first left-right there is a gentle left, followed by an easy hairpin left, then a straightaway. The GTI’s adaptive damping absorbs the blow when cutting the curbs, never sending the front end off course. About two-thirds of the way through that hairpin, we were back on the gas hard, listening to that outside tire struggling for grip, but always pointing us towards the inside

Pinning it down the first straight, which was faster going in the new direction, brings you to a tight hairpin, necessitating a hard brake from about 110 mph to about 30 mph. It tightens, which meant more time for that outside tire to power us back in the other direction, before a shorter straight leads into a full-speed sweeper to the right ending in a 90-degree turn at the end. No matter how hard, or how many times we hit the brakes, they were always there, fade-free, and with little pedal travel. That made us feel safe no matter how hard we overcooked it.

Moving to the autocross course, we turned the ESC off, to use that front diff as much as possible. And here it works even better than on the road course. If you’ve ever driven a jet ski, you know that the turning is based on power. If you let off the throttle, the ski just plows forward. It was the same here. No matter how close you are to hitting cones, you need to stay on the power. All of the torque goes to that outside front wheel, and instead of pushing outward, it feels like it’s pulling you towards the apex of the turn. And that, along with those stiff brakes, will keep you confident at any speed, in any corner, on any racetrack.

The difficulty on the autocross course only revealed itself in the slalom, where the steering wheel was close to its center, meaning the ratio was slower. We had to whip the wheel 90 degrees one way, then 180 degrees the other way, then back, a few times. We’ll always take a quicker steering ratio than a slower one, like the Alfa Romeo Giulia, which almost turns before your brain tells your hands to move. 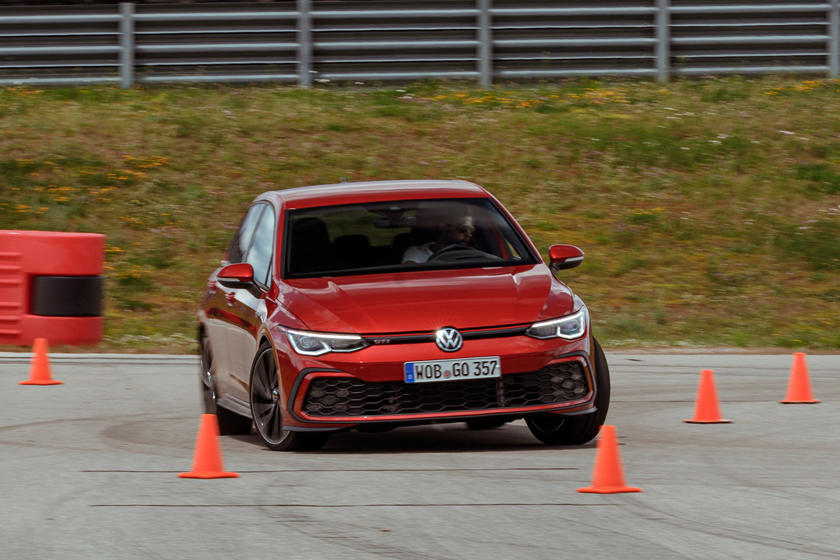 One thing we noticed here, and on the autocross course, were the plaid-patterned seats. They’re comfortable for normal driving, but we could have used some extra thigh bolsters on the short track. And if we were being greedy, a soft place for our knee to land when we’re bracing our body around a turn. Either one would work, and for buyers who plan on regularly tracking their cars, the seats would be a good first upgrade. Otherwise, like the last few, this GTI is a peach.

There’s also a lot of buttons on the steering wheel, which is great for normal driving. But on the track, we hit the steering wheel heat button, the driver-assist buttons, and the volume button as we were trying not to pretzel our arms around the tighter bends. While we’re on the steering feel, it was nicely weighted, and firms up considerably as you get further off-center. GTIs have always been good at this

It’s important to remember that this is only a track drive, and we expect to get the 2022 VW Golf GTI on the street soon. But what we’ve learned here is that the more aggressively you drive the hot hatch, the better it responds and that limited-slip differentials should be on all front-wheel-drive cars, especially if they work as well as this one does. Add to that what we know about the GTI in general, and we can predict another winner here. If not in sales, certainly in our hearts.

It goes on sale in the fourth quarter of this year, and with the demise of the Ford Focus ST, it’ll have its sights set squarely on the Hyundai Veloster N